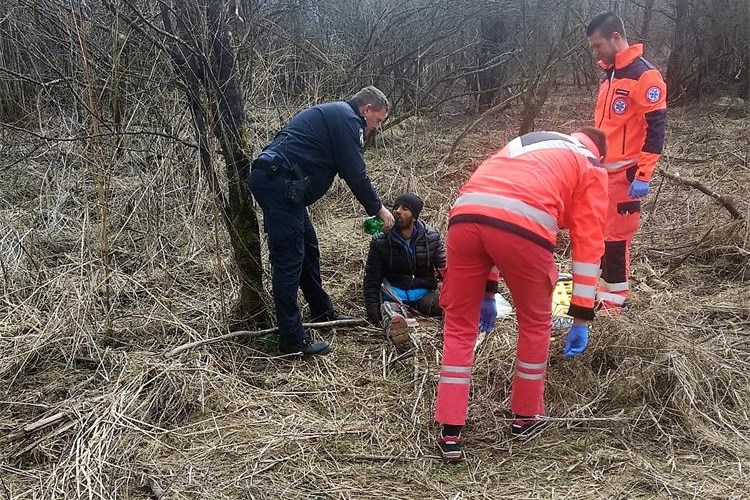 Even today, owing to the swift response of the Croatian police, a family of five was taken care of in the area of Korenica, including an injured, heavily pregnant woman with three children. The pregnant woman was taken care of in the hospital in Gospić, and her husband, who expressed his intention to apply for international protection in the Republic of Croatia, was transferred to the police station along with their three children.

The published Human Rights Watch report and video footage contain very general claims of alleged inhumane treatment of migrants by the Croatian police and provide no concrete evidence.
It is important to take into consideration that, because they have been deterred by police officers from entering the Republic of Croatia or they have been subjected to other prescribed procedures by which they were returned to the country from which they illegally entered the Republic of Croatia, migrants most often falsely accuse police officers of violence expecting such accusations to assist them in making a new attempt to enter the Republic of Croatia and to continue on their way to their destination countries.

Regarding the application of deterrence at the external border of the EU, which has proven to be effective, advocates of illegal border crossings and illegal entry into the EU have for a long time been publishing information on alleged illegal treatment of migrants by the Croatian police at the state border, and on the police treatment of migrants in general. The treatment of the Croatian police towards migrants is maliciously distorted and misrepresented, with the sole purpose of pressuring this Ministry which consistently implements the measures of state border surveillance and prevents illegal entry into the Republic of Croatia. The accusations against the police made so far have not been successful, as the Ministry continues to deter illegal entries at the external border of the EU. In reality, it is a completely different story. Bosnia and Herzegovina has acknowledged on multiple occasions that it cannot protect its borders with Serbia and Montenegro because of insufficient capacities. In such situation of almost uncontrolled influx of migrants, the state authorities of Bosnia and Herzegovina direct them to the Una-Sana Canton. Transport toward this area is organized through Bosnia and Herzegovina, and it is also important to mention the coincidental fact that the railway connection between Sarajevo and Bihać was established after 27 years right at the time when migrants were directed towards the border with the Republic of Croatia. Furthermore, despite the efforts of the international community and the Republic of Croatia as an EU Member State that funded humanitarian accommodation in Bosnia and Herzegovina, migrants are additionally accommodated in the Vučjak camp, just 6 kilometres from the border with the Republic of Croatia, preventing them from moving around the town of Bihać and its surroundings and directing them straight into the illegal crossing of the state border. Even the laws of Bosnia and Herzegovina consider such a route toward the Republic of Croatia to be illegal crossing which is as such subject to appropriate misdemeanour or criminal proceedings.

Unfortunately, HRW did not present any of these facts in its reportage. There is really little or no news of a smooth entry into Bosnia and Herzegovina from Serbia or Montenegro, which is very unusual, given that this is precisely the cause of the current situation in Bosnia and Herzegovina, and the situation in Vučjak or Bihać is just a consequence for which the police of the Republic of Croatia is in no way responsible.

At the border with Bosnia and Herzegovina, which is the most vulnerable to illegal migration, the Republic of Croatia has engaged a large number of police officers performing state border surveillance and has installed modern technical means of deep optical and radar surveillance of the borderline day and night in all weather conditions in order to deter in line with Article 13 of the Schengen Borders Code.

As of 18 July 2018, the border with Bosnia and Herzegovina is monitored from the air in cooperation with the European Border and Coast Guard Agency (FRONTEX) which ceded the aircraft for controlling the EU external borders.

Migrants who cross the state border illegally are treated in accordance with the Aliens Act.

Returns to third countries are conducted on the basis of the Aliens Act and bilateral readmission agreements concluded by the Republic of Croatia with third countries.
The priority policy of the Ministry of the Interior is legal and sustainable migration, and the Ministry cooperates with neighbouring countries to exchange information on the state of security at the state border and the movement of illegal migration, and it implements joint mixed patrols to prevent illegal migration and maintain a favourable state of security at the state border.
All reports from non-governmental organizations and other organizations received by the Ministry so far about alleged use of coercive measures against migrants by police officers have been verified, bearing in mind that, as a rule, these reports do not contain sufficient information needed for criminal investigation. In all the above cases, detailed field checks were carried out in police administrations, and no case of police officers using coercive means against migrants has so far been found. Furthermore, the allegations that police officers committed theft to the detriment of third-country nationals have not been confirmed. An examination of the allegations has so far identified several cases of false declarations.

We just want to mention the 2018 case of a Syrian citizen who falsely declared that he had been separated from his underage daughter by the Croatian police. He was let in the Republic of Croatia so his allegations could be investigated. He soon escaped from the Republic of Croatia, and it was later determined that the child had not even been with him, that is she had not even left Lebanon.

Another significant case was a false accusation written in 2019 in a newspaper article titled “Iron is forged while hot” claiming that the Croatian police had inflicted injury on a migrant, and a recent case of a migrant with severe tibia burns confirmed that this had actually been a pattern of mutual confrontation among the migrant population, especially between nationals of Afghanistan and Pakistan.

The Ministry of the Interior thoroughly examines all allegations of unprofessional police conduct, which often do not contain sufficient verifiable information, and in case of suspicion that a criminal offense has been committed, the State’s Attorney Office is notified, which carries out actions within its competence.

Police officers performing the tasks of state border surveillance who apply deterrent measures are specifically trained in the treatment of migrants and in identifying persons in need of assistance and protection. Likewise, the Ministry of the Interior conducts regular training of border police officers in the segment of human rights. The EU approved emergency assistance to the Republic of Croatia to strengthen border control activities at the Croatian part of the external border due to increased migration pressure, and the training of police officers was conducted by non-governmental organizations. In addition, the implementation of additional training included a segment on the EU law and fundamental rights, in which regional level multipliers and police officers in the field of state border surveillance of police administrations most exposed to migration pressures were trained.

There have been several cases of the Croatian border police rescuing migrants who were in life-threatening situations at the state border, such as deep snow or impassable mountains. We would like to recall several cases of migrant rescue on the Plješivica Mountain who were trying to illegally enter the Republic of Croatia. However, despite our efforts, there were migrant casualties, such as the death of a migrant as a result of a fall in a pit near Rudopolje in the area of ​​the Ličko-Senjska Police Administration on 31 March 2019, and the deliberate landing of a smuggler van in the Kupa River on 25 August of this year, when police officers rescued 11 migrants; however, one woman died later at the scene while medical assistance was being provided.

Even today, owing to the swift response of the Croatian police, a family of five was taken care of in the area of Korenica, including an injured, heavily pregnant woman with three children. The pregnant woman was taken care of in the hospital in Gospić, and her husband, who expressed his intention to apply for international protection in the Republic of Croatia, was transferred to the police station along with their three children.

On this occasion, we also want to emphasize that when treating migrants, the police respect their fundamental rights and dignity and allow them access to the international protection system if they need such protection, in accordance with general human rights documents, European Union regulations and national legislation. Furthermore, this Ministry has zero tolerance for unlawful use of coercive means by the Croatian police against any population, as well as zero tolerance for non-prosecution of any crime or misdemeanour committed by police officers. All available information on possible allegations of the use of force against migrants or the commission of criminal offenses to the detriment of migrants is carefully examined by the Ministry in each individual case.